Gustave Doré, Sister of Charity Saving a Child, Episode in the Siege of Paris, 1871

Gustave Doré's engravings won him worldwide recognition as one of the foremost illustrators of his time and yesterday at Tate Britain we were given a rare opportunity to stand nose to canvas with this fine example of his oil painting. The scene shows the awful human cost of the siege of Paris, when the French capital was encircled by Prussian troops after Napoleon III's surrender on 2 September 1870. Whilst other artists fled, Doré joined the National Guard to defend the capital. Here, painting that winter, he seems to be recording a scene that he had actually witnessed. He shows a nun carrying a child to safety along a snowy blood-stained street, by a wall which might belong to the religious house where she hopes to take the child. A part of the city burns behind her, and someone sprawls wounded on the pavement further back. Ahead of her, a jagged piece of shrapnel lies on the snow, and at the side is a large bloodstain. The painting showcases Doré's unique vision as both fine artist and illustrator.
Posted by Dark Painting at 12:08 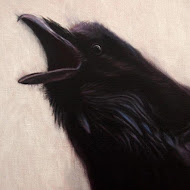